40 Years in the Making

Ms. Jessie Ball’s fortunes changed in 1920. It was during this year that Jessie, having returned to her childhood home in the Northern Neck of Virginia, reconnected with a long-time friend, Mr. Alfred I. duPont – of the distinguished duPont Family. Shortly thereafter, the two wed, and Jessie adopted the name that would become associated with enduring community philanthropy and commitment to place. Since her death in 1970, the Jessie Ball duPont Fund, a Jacksonville-based private foundation, has granted more than $350 million to nonprofits across the country – with the vast majority of those grant dollars going to communities that Ms. duPont once called “home.” Through good market fortune and prudent resource management, the Fund’s endowment has grown from a modest $48 million to $295 million – enabling the staff and trustees to think strategically about how best to serve the wishes expressed through Mrs. duPont’s will.

That is not to suggest that Jessie Ball duPont Fund President, Dr. Sherry Magill, hasn’t seen her fair share of trying economic conditions. Following the 2008 economic collapse, the Fund’s leadership watched as the portfolio dropped a staggering 28% virtually overnight. In the wake of the economic collapse, the Fund’s trustees began asking hard questions about their investment strategy. Sherry recalls, “We started to think about what business we were in. We weren’t in the investment business. We were in the business of helping communities.” After a number of internal conversations, the trustees agreed to allocate $10 million for direct community investments to “help communities” respond to the increased demand for social services brought about by economic dislocation.

With the help of a consultant, the Jessie Ball duPont Fund trustees and staff began an 18-month learning journey - primarily regarding the use of Program Related Investments (PRIs). One key takeaway from this period of structured learning was that the trustees would be best served to invest in nonprofit organizations that were accustomed to taking on debt. To this end, the trustees decided to begin making strategic PRIs to Community Development Financial Institutions (CDFIs) serving low-to-moderate income populations in Virginia, Delaware, and Florida – states where the Fund had grantmaking concentrations. These early impact investments (1) allowed the Fund to generate impact in the area of affordable housing, (2) spread their investment risk over the CDFIs’ multi-project portfolio, and (3) limited the investment monitoring demands placed on internal staff. Although the trustees had allocated the local investment dollars and modified the Investment Policy Statement to accommodate place-based investing, full deployment of their first PRI would not come until 2011. The Fund “stayed the CDFI course” for several years – executing more PRIs to CDFIs in an effort to, as Sherry describes it, “bring capital markets back to disinvested neighborhoods.” It was the Fund’s focus on disinvested neighborhoods that led them to what would become their largest local investment to date.

In December 2012, Sherry toured the long-abandoned Haydon Burns Library building in Jacksonville, Florida. Despite the graffiti and rumble, Sherry was convinced that this landmark could have a second act. Shortly thereafter, Sherry shared her vision with the trustees and once again, asked them to commit more of the Fund’s endowed resources to place-based investing. Many of the Fund’s assets within the traditional investment portfolio – fixed income, private equity and real estate – were economic and community development drivers domestically and abroad, but what percentage of those assets were bettering the places that Mrs. duPont held dear? Sherry states, “I can’t see impact with our investments in China or emerging markets. I can see the effect we’re having with our local investments.”

In June 2013, the Jessie Ball duPont Fund trustees approved their first Mission Related Investment (MRI) when they purchased and paid the back-taxes on the Haydon Burns Library for a total of $2.45 million. By combining the Fund’s $20 million investment with $5 million of New Markets Tax Credits, the capital stack was complete. Shortly thereafter, ground would break on the Jessie Ball duPont Center. According to the specs, the four-floor Jessie Ball duPont Center would feature nonprofit office spaces, a state-of-the-art conference center, communal kitchens, a rooftop garden, LED and solar infrastructure, a rain water retention system, a 1,500 square foot concourse and a 3,500 square foot Great Hall. 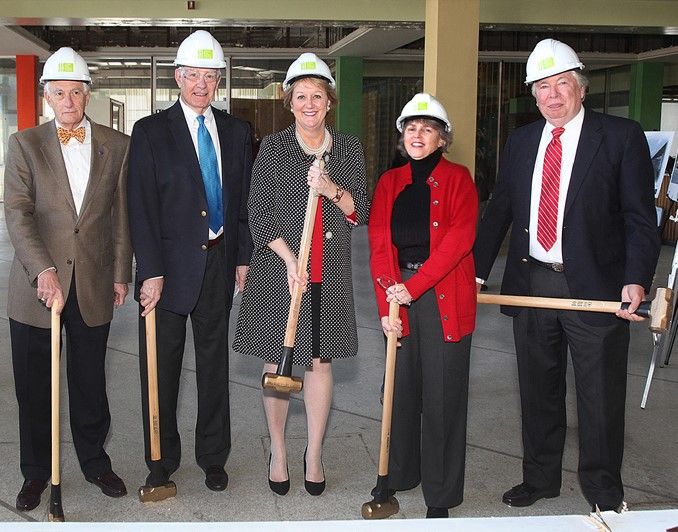 There was an immediate outpouring of demand for the subsidized nonprofit office space, but as usual, the Fund’s leadership paused to consider mission and goals. From the beginning, two of the goals of the Jessie Ball duPont Center were (1) to create a financial model that quickly allowed the building to reach a level of self-sufficiency and (2) to offer a rental pricing structure that allowed the nonprofit tenants to significantly lower their operating costs. With those goals in mind, the Fund’s leadership asked the question, “Which nonprofits provide the backbone for Jacksonville’s social safety net?” Sherry and the program staff went to work identifying organizations that comprised Jacksonville’s core nonprofit services - including family asset building campaigns, workforce training, policy and advocacy, emergency family services and after-school care. Jacksonville’s backbone nonprofits are similar to those found in communities across the country, including but not limited to Big Brother Big Sisters of Northeast Florida, Catholic Charities, Delores Barr Weaver Policy Center, Family Foundations, First Coast YMCA, Jacksonville Public Education Fund, Nonprofit Center of Northeast Florida and United Way of Northeast Florida.

Rather than delay the construction while the prospective tenants fundraised to complete their office buildout, the Fund’s leadership authorized that a series of PRIs could be issued to organizations. Those standard PRI terms – 7 years, fixed interest between 1-2%, balloon payments and no pre-payment penalty – allowed the construction timeline to remain intact and the nonprofit tenants to obtain below market-rate capital. To date, these nonprofit borrowers have remained in good-standing and are on track for repayment.

On June 6, 2015, the Jessie Ball duPont Center celebrated its grand opening. In attendance were leaders from the public, private and independent sectors. Sherry often shares that she believes that philanthropy is most impactful at the local level. As with the Jessie Ball duPont Center, Sherry states that philanthropy “has the enormous promise and the opportunity to bring folks together.”

On June 30, 2018, Sherry served her final day as President of the Jessie Ball duPont Fund. Throughout the past 26 years, Sherry has been a fierce advocate for the nonprofit community and those that they serve. Part of the vision behind the Jessie Ball duPont Center was restoring a sense of pride and dignity to nonprofit spaces. Sherry dedicated her life to living out the Last Will and Testament of Mrs. Jessie Ball duPont, a woman who often stated that “philanthropy without strategy is just charity.” Well if that is the case, I believe Mrs. duPont would be enormously proud of the trailblazing philanthropist who shepherded her legacy for so many years.

Thank you to Sherry Magill and Chris Crothers, Senior Program Officer of the Jessie Ball duPont Fund, for helping to share this story with the LOCUS team.

The LOCUS team was able to provide due diligence services on two of the Fund’s prospective PRIs. If you are considering PRIs and want to learn more about the Jessie Ball duPont Fund or other foundations taking this approach to local impact investing, contact Sydney England at sydney@locusimpactinvesting.org  or (804) 793-0985.